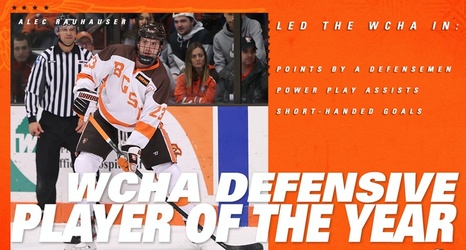 BLOOMINGTON, Minn. - The Western Collegiate Hockey Association announced the recipients of the WCHA's Individual Awards on Tuesday afternoon (March 17). For the second time in his career, Alec Rauhauser was named the WCHA Defensive Player of the Year, also receiving the honor following his sophomore campaign in 2017-18. Bowling Green has now had two WCHA Defensive Player of the Year winners, both belonging to Rauhauser.

The senior captain Rauhauser continued one of the historically great careers in the Orange and Brown, becoming the 72nd player in program history to reach 100 career points, totaling 122 which will place him at 52nd on the all-time scoring list.