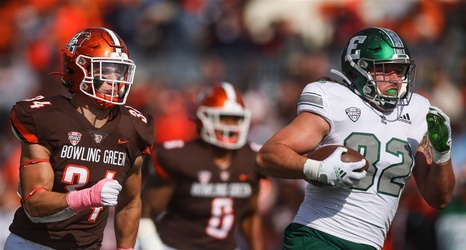 BOWLING GREEN — A glance at Eastern Michigan’s depth chart shows a plethora of Toledo-area talent, but perhaps the top solo performer from Saturday wasn’t even listed on it.

If you had a dollar to bet on who was going to lead EMU in receiving against Bowling Green State University and the FBS’ third-ranked passing defense, you probably would not have placed it on Gunnar Oakes.

But the 6-foot-5 junior from Swanton did just that in the Eagles’ 55-24 rout of the Falcons at Doyt Perry Stadium.

It was more than a simple, happy homecoming for the Swanton product and 2016 All-Blade defensive back, who said it was “just awesome to see everyone from back home.