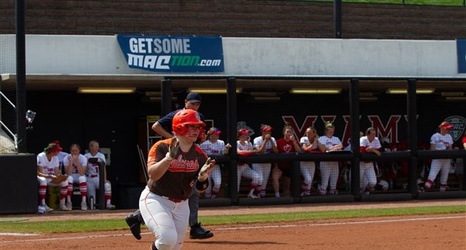 Bowling Green State University’s run to a Mid-American Conference softball tournament championship was stuffed by top-seeded Miami in a 11-0 RedHawks victory in five innings on Saturday in Oxford, Ohio.

In the double-elimination tournament, BGSU (2-2) would have needed to defeat Miami (3-0) twice on Saturday. The RedHawks didn’t allow the second game to become a possibility, after getting after MAC pitcher of the year Payton Gottshall early.

Simply put, Gottshall ran out of gas in the second inning. She was tabbed to start on Saturday after pitching in both of Bowling Green’s games on Friday. On Friday, she pitched all 17 innings the Falcons played in, and she threw a combined 282 pitches as BGSU advanced to the final day of the tournament with wins over Ohio (in 10 innings) and Central Michigan.