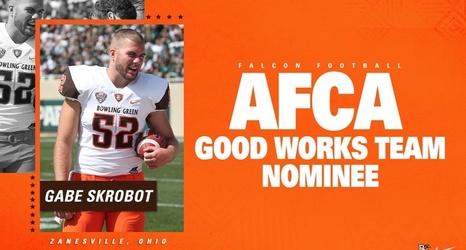 Northbrook, Ill. – Redshirt junior Gabe Skrobot is one of 78 FBS nominees for the 2019 Allstate AFCA Good Works Team, an annual award given to college football players for the impact they make off the field. A total of 137 student-athletes across all levels of football have been nominated for the award.

Established in 1992, the Allstate AFCA Good Works Team® continues to be one of the most coveted community service awards in college football. From the 137 nominees, the final roster of 23 award recipients will be announced in September, bringing together 11 players from the NCAA Football Bowl Subdivision; 11 players from the NCAA Football Championship Subdivision, Divisions II, III and the National Association of Intercollegiate Athletics (NAIA); and one honorary head coach.