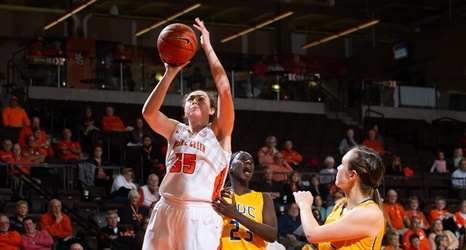 The Bowling Green State University women's basketball team had an answer for Marshall University at every turn on Saturday afternoon (Dec. 7), as the Falcons posted an 82-69 win at the Cam Handerson Center.

Junior Angela Perry scored a game-high 25 points to pace five double-digit scorers for the Falcons (5-3) and classmate Madisen Parker had 16. Perry, who entered the game as one of the nation's leaders in field-goal percentage, was 11-of-13 from the floor vs. the Thundering Herd.

Parker scored 10 of her 16 points in the fourth quarter, including back-to-back three-pointers after the Herd had cut BG's lead to four points.