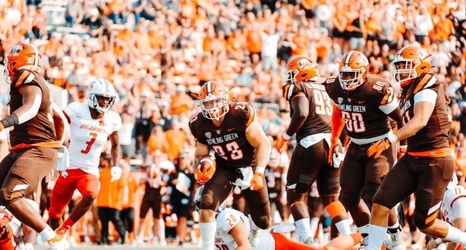 On an afternoon that remembered the tragedies of Sept. 11, 2001, and recognized the men and women who protect America, BGSU football opened the 2021 homestand at Doyt Perry Stadium against the South Alabama Jaguars.

The Falcons got out to a great start, blocking a punt that resulted in a safety to give them an early 2-0 lead. Later on in the first quarter, linebacker Darren Anders would intercept Jaguar quarterback Jake Bentley, and return it 27 yards for a touchdown.

“My teammates told me that [if] I went to the right, I would’ve walked in [for a touchdown] ,'' Anders said.