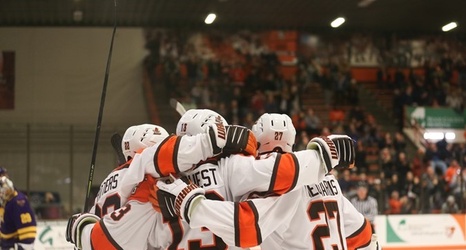 BOWLING GREEN, Ohio - The No. 18 Bowling Green State University hockey program added four new commits during the national signing period. With the four new names, the list of Falcons signed on for future rosters grows to eight. Currently, the Orange and Brown hold a 13-11-2 record, including being 8-8-2-2 in WCHA play.
Next Home Game: The Falcons will return to the ice at Slater Family Ice Arena on Feb. 7 to begin a weekend series against Alaska Anchorage. Both games are set for 7:07 p.m. puck drops and will be the second series between the teams this year.