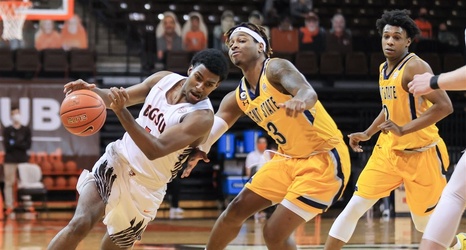 BOWLING GREEN — The chances were undoubtedly there.

A long losing streak in tow, Bowling Green had a quality team on the ropes late Tuesday at the Stroh Center — but the Falcons couldn't seal the deal.

Finally creating the end-game defense it needed for long stretches, Bowling Green instead did not capitalize on its many offensive chances to overtake visiting Kent State, falling 71-67 for its sixth consecutive loss.

The Falcons failed to score in the final 2 minutes, 43 seconds of the game, and were left to rue the many misses that would have changed the game.