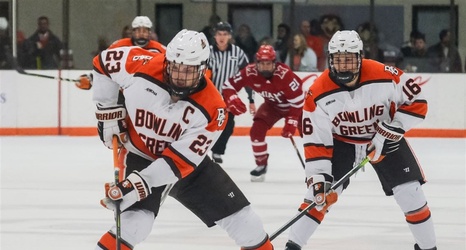 BOWLING GREEN — For the second time in three years, Bowling Green defenseman Alec Rauhauser was named the best at his position in the Western Collegiate Hockey Association.

Rauhauser, a senior, earned defensive player in the WCHA’s individual awards, which the league announced on Tuesday.

The Falcons’ captain accumulated 35 points (11 goals, 24 assists) in 38 games this season, which led all WCHA defensemen and finished fourth nationally among blueliners.

As a key cog in Bowling Green’s power play, Rauhauser racked up 17 assists with a man-advantage, the best mark in the conference. His three short-handed goals also tied for the national lead.