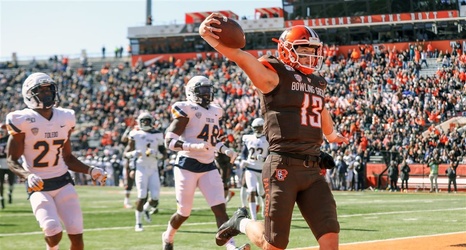 BOWLING GREEN — At long last, Bowling Green has its hands on the Battle of I-75 trophy.

The Falcons shocked Toledo on Saturday, holding the lead for more than 58 minutes in a 20-7 victory against the rival Rockets.

Three questions after BG’s first win against Toledo in 10 years:

1. What’s the ceiling for this team?

Anyone that can answer this question is giving, at best, an educated guess, because even the Falcons themselves aren’t quite sure. Bowling Green — the same team that lost by 42 points at Kent State earlier this season — beat a Toledo team that might be the best team in the Mid-American Conference.