'What time is kick-off?': Brave Crystal Palace fans head off on 116-mile charity cycle to Vitality Stadium only for Premier League clash against Bournemouth to get called off halfway through their journey... but hardy bunch battle on to complete the route 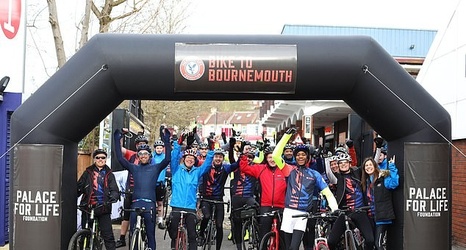 Crystal Palace fans have completed a 116-mile charity cycle to Bournemouth's Vitality Stadium for their Premier League clash only for the match to be called off halfway through their journey.

Palace fans, in support of the Palace For Life foundation, have been raising money for the local community in South London by completing a bike-ride to their next scheduled Premier League match against Bournemouth.

After setting off from the Eagles home ground Selhurst Park, they found out that the match had been postponed but the foundation decided to continue the bike-ride anyway.