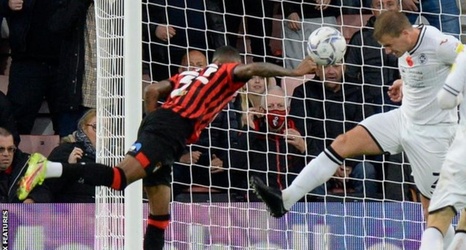 Championship leaders Bournemouth got back to winning ways with a clinical victory over mid-table Swansea.

After the Swans dominated early on, the Cherries went ahead when Philip Billing crossed for Dominic Solanke to fire home his 13th goal of the season.

Solanke volleyed in Leif Davis' cross for 2-0 early in the second half before Ryan Christie had a shot blocked and Jaidon Anthony nodded in the rebound.

Jamal Lowe then teed up Anthony to drive in a fourth in stoppage time.

Referee Tony Harrington brandished five yellow cards, four of them before half-time, and the match threatened to boil over when players clashed on several occasions while the result was still in the balance.