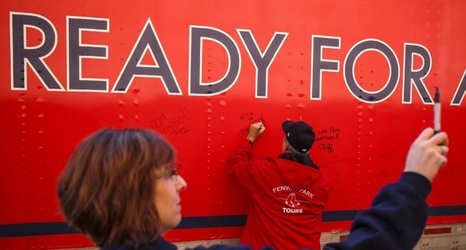 While one New England sports team capped off a championship season Sunday night, another one started its title defense a few hours later.

The reigning World Series champion Red Sox sent their equipment truck on its way to Fort Myers, Fla., Monday morning, even as the Patriots were basking in their sixth Super Bowl win.

The 53-foot truck, hauling all the equipment the team will need for spring training, was loaded at 7 a.m. and departed Fenway Park around noon for the 1,480-mile trip to JetBlue Park.

This is Milford native Al Hartz’s 21st consecutive year driving the truck, which was led down Van Ness Street by a flatbed carrying the team mascots and Fenway Park ambassadors tossing team schedules and soft baseballs to fans.