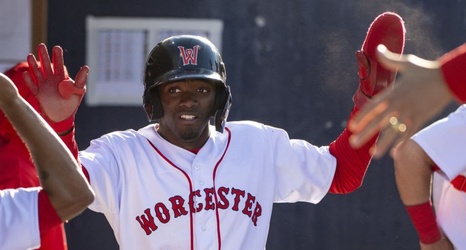 BOSTON, MA - MAY 11: Marcus Wilson #12 of the Worcester Red Sox reacts after scoring during the eighth inning of the inaugural game at Polar Park against the Syracuse Mets on May 11, 2021 in Worcester, Massachusetts. It was the first game ever played at Polar Park. (Photo by Billie Weiss/Boston Red Sox/Getty Images)

What does Marcus Wilson’s future with the Red Sox look like?

The Boston Red Sox may soon have a decision to make when it comes to outfield prospect Marcus Wilson’s future in the organization.

Wilson, who turns 25 in August, is quietly putting together a solid season with Triple-A Worcester, as he comes into play Tuesday sporting a .