Baseball Scores That Have Never Happened 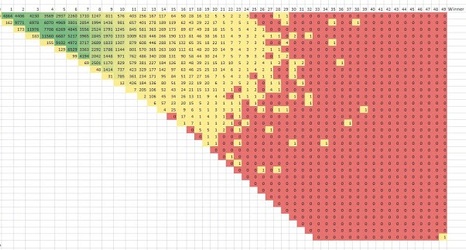 On August 20, 2018, Jeremy Frank posted a graph to Twitter that showed how often each possible score had happened in a baseball game (since 1871).

Sidebar: Frank's Twitter page (@MLBRandomStats) includes numerous interesting experiments, including simulating an entire current season with every outfield fence 100 feet tall, how many games could a team of 25 Barry Bonds (including pitcher and catcher) win, and what would Babe Ruth's 1921 season look like if he played his games in a ballpark with a 100-foot tall fence that was 450 feet from home all around.