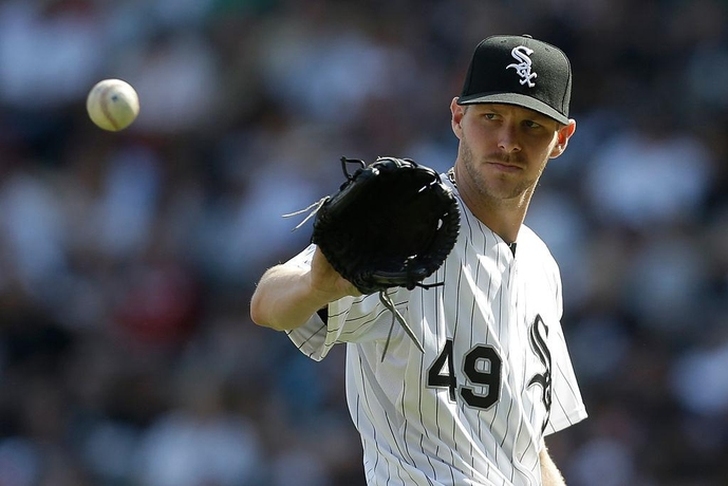 The MLB trade deadline of August 1st is rapidly approaching, and the trade rumors around the Boston Red Sox are starting to heat up. Boston is 55-41, but still 1.5 games back of the AL East lead. They've already landed starter Drew Pomeranz from the Padres, but might not be done yet. With that in mind, here all the latest Red Sox trade rumors.

Red Sox eyeing big move
Boston's acquisition of Pomeranz was one of the biggest moves anyone has made so far this season, but that's not the only big splash the Red Sox are prepared to make. According to ESPN's Jayson Stark, Boston is trying to "do something big" before the deadline:

Clubs talking with Red Sox say they're still trying to do "something big." But for what high-end starter? Chris Sale? Sonny Gray? Mystery P?

The Red Sox have been heavily linked to Sale over the past few days and are known to be pursuing a deal to try to land him.

Boston dealing Buchholz?
Clay Buchholz has had problems staying in Boston's starting rotation this season, and with their desire to add another starting pitcher, he's likely on his way out over the next few days. One team that has shown a lot of interest in him is the Royals, according to MLBTradeRumors' Connor Byrne:

The Royals have interest in Red Sox righty Clay Buchholz, who’s currently in their bullpen, but Boston would have to pick up large portion of his remaining $13MM salary for 2016 in a trade. Buchholz’s contract also includes a $13.5MM club option for next season. In 20 appearances (13 starts) and 82 2/3 innings this season, the 31-year-old has compiled a sky-high 6.10 ERA to pair with ugly strikeout and walk rates (5.99 and 4.03, respectively, per nine).

Red Sox targeting Hellickson?
MassLive.com's Christopher Smith says the Red Sox will likely go after Jeremy Hellickson as another option if they strike out on the bigger names on their list:

The Sox still could make a trade for a backend starter if Rodriguez doesn't pitch well in his few starts before the deadline. Philadelphia's Jeremy Hellickson is a starter who the Red Sox reportedly have scouted. He probably would not cost a lot in terms of prospects.