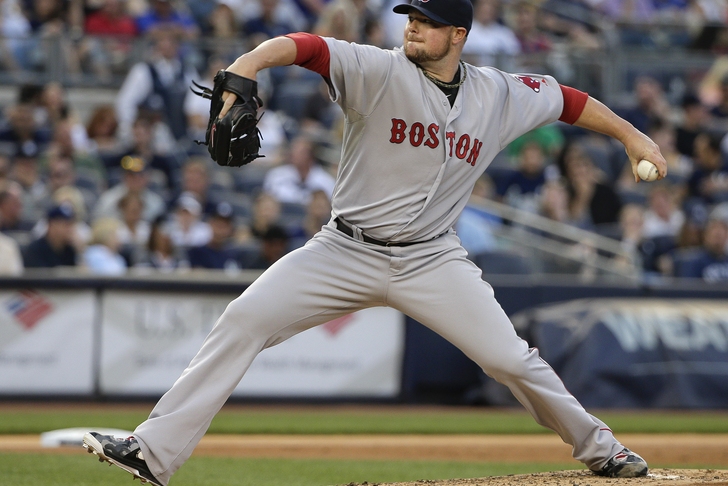 The St. Louis Cardinals and Los Angeles Dodgers may be taking over headline space in the current negotiations surrounding Boston Red Sox ace Jon Lester, but there are a couple of new contenders who could end up stealing the spotlight over the next 24 hours.

According to Jon Morosi of FOX Sports 1, the Miami Marlins have inquired on Lester and on fellow Boston starter John Lackey:

Red Sox have had discussions with Marlins regarding Jon Lester in addition to John Lackey, source says. @FOXSports1

Morosi is sure to point out that this doesn't mean the Marlins are trying to acquire both pitchers in one fell swoop:

That's not to say Marlins are trying to acquire *both* in the same deal. But discussions between the teams have involved both pitchers. — Jon Morosi (@jonmorosi) July 30, 2014

Per Jeff Passan of Yahoo! Sports, in addition to the Marlins, the MLB-best Oakland Athletics are also turning their attentions to Lester with just mere hours before Thursday's non-waiver trade deadline:

While some teams are in on both Lester and Lackey -- @jonmorosi says Marlins are among them -- Oakland is focusing strictly on Lester.

Adding Lester would give the Athletics a fantasy league-like one-two punch of Jeff Samardzija and Jon Lester at the front of their starting rotation. If that were to happen, the A's would likely become prohibitive favorites to capture their first World Series title in 25 years.

In addition to the aforementioned two teams, keep your eye on the Baltimore Orioles as well. MLB.com is reporting that the O's are engaged with the Red Sox in serious talks, despite a move not being imminent at this time.