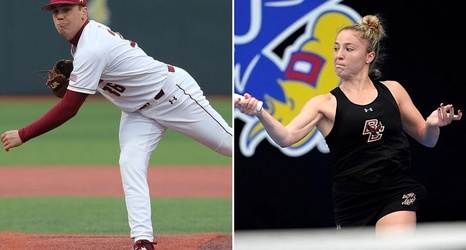 CHESTNUT HILL, Mass. – Boston College seniors Jackie Urbinati and Dan Metzdorf have been named the Nissan Eagles of the week for their performances this past week.

Urbinati – competing with the women's tennis team in the first round of the NCAA Tournament on Friday – won her final collegiate singles match in straight sets over Florida's Victoria Emma, 6-2, 6-2. The Harrison, N.Y. native was one game away from her eight consecutive doubles victory with teammate Kylie Wilcox, but the match against the Gators went unfished with the duo leading 5-3.