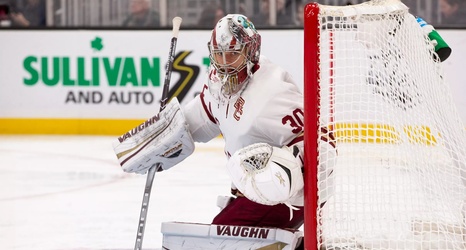 Earlier today, freshman goaltender Spencer Knight was announced as a finalist for the Mike Richter award, given to the top goaltender in NCAA men’s hockey during the regular season. He joins Jeremy Swayman of Maine, Matthew Galajda of Cornell, Dryden McKay of Minnesota State, and Strauss Mann of Michigan as one of five finalists. He will look to become BC’s second Mike Richter award winner with Thatcher Demko, who won it in 2016.

This season, Knight finished with a .931 save percentage, 1.97 goals against average and a record of 23-8-2. He was also a Hockey East Second Team All-Star and was unanimously selected to the Hockey East All-Rookie Team.