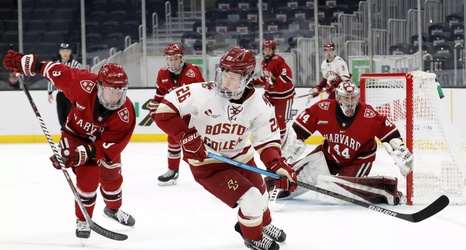 Well, the Beanpot is in the rearview mirror.

And, now, all of the attention for the Boston College Eagles comes back to the road to the conference championships. And what a road it has a potential to be. Right now, there are nine teams that have a realistic claim to eight spots in the conference tournament, and at this point every spot in the tournament is up for grabs.

This week, Boston College plays one of the two teams that, realistically, don’t have a claim to the tournament. Unlike their counterpart in Burlington, however, Merrimack has actually shown signs of life against some of the league’s best teams, most recently a 5-1 result against BU in Allston.