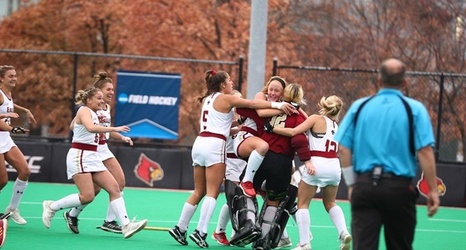 LOUISVILLE, Ky. – The No. 7 Boston College field hockey team is heading to its first-ever final four after defeating the No. 5 Louisville Cardinals on Sunday, Nov. 17 in Louisville, Ky. The game had to be decided in a shootout, where Margo Carlin would score the game-winner and Sarah Dwyer would make the final save to give the Eagles the victory.

Dwyer made seven saves in the victory, including four in the overtime period to keep the Eagles' hopes alive.

BC opened the scoring with just six seconds left in the first half off the stick of Elizabeth Warner.