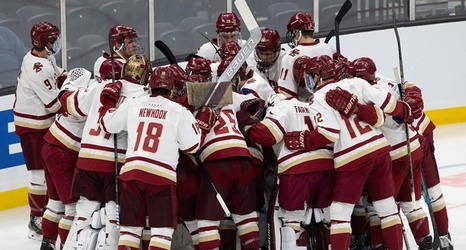 CHESTNUT HILL, Mass. – Sixth-ranked Boston College returns to Hockey East play as it opens a home-and-home series with Merrimack at 7 p.m. on Friday (Feb. 14) at Lawler Rink in North Andover for the 101st meeting in series history. The series concludes on Saturday (Feb. 15) with a 4:30 p.m. puck drop on the Heights. Saturday's game will air live on NESN and both games can be heard on WEEI 850 AM and BCEagles.com.

GIONTA TO THE RAFTERS
• Former All-American Brian Gionta '01 will have his jersey retired by the program at the first intermission during the home game against Merrimack on Saturday
• Gionta was a three-time Hobey Baker finalist (1999, 2000, 2001) and captained the Eagles to the 2001 NCAA Championship, the program's first since 1949
• He graduated as the program's all-time leader in goals (123) and ranks second all-time in points (232)
• The Rochester native was inducted into the BC Varsity Club Athletic Hall of Fame last October and was also named to the Class of 2019 for the U.