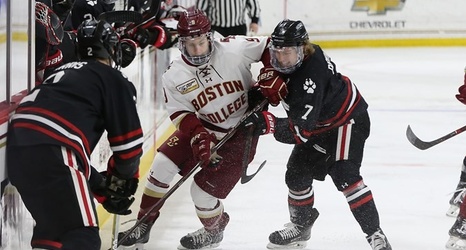 CHESTNUT HILL, Mass. – No. 5 Boston College opens a Hockey East home-and-home series with No. 10 Northeastern on Thursday (Feb. 20) at 7 p.m. at Matthews Arena on NESN. The series concludes at Kelley Rink on Friday (Feb. 21) at 7 p.m. on NESN and NESNplus (beginning at 8 p.m. during Bruins coverage). Both games can be heard on WEEI 850 AM and BCEagles.com. BC sits sixth in the Pairwise rankings for the 2020 NCAA Tournament while Northeastern ranks ninth.

PENNANT RACE
• BC (12-6-0) is tied with UMass (11-6-2) for first place in Hockey East with 24 league points
• The Eagles hold the tiebreaker on the Minutemen by virtue of a 2-1-0 head-to-head record
• Northeastern is tied with Providence for sixth place, just three points back with 21
• The Eagles and Huskies are tied for the least number of league games played (18)
• Only five points separate first from ninth place in the conference with three weekends remaining

MERRIMACK SWEEP
• Boston College swept Merrimack last weekend in a home-and-home series for four key Hockey East points
• Trailing 1-0 after one on Friday at Lawler Rink, seniors Luke McInnis and Ron Greco netted goals in the second to put BC ahead for good; senior Zach Walker assisted on both tallies for his second career multi-point performance
• On Saturday in Chestnut Hill, rookies Alex Newhook and Matt Boldy combined for four goals and eight points in a convincing 6-2 win to complete the weekend sweep
• Newhook (2-3-5), Boldy (2-1-3) and classmate Mike Hardman (0-2-2) combined for 10 points and a plus-11 rating as a unit
• Freshman defenseman Mitch Andres also collected his first career point with an assist
• Spencer Knight stopped 53 of the 57 shots he faced for a .