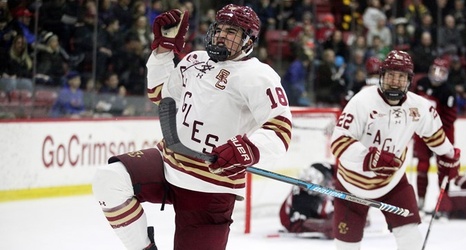 BOSTON – No. 4 Boston College faces No. 17 Harvard in the consolation game of the 68th Beanpot on Monday (Feb. 10) at 4:30 p.m. The Eagles (sixth) and Crimson (21st) are both battling for Pairwise position in the non-league matchup as BC will try to avoid just its ninth fourth-place finish all-time at the Beanpot. Radio coverage on WEEI 850 AM and BCEagles.com begins at 4:15 p.m. from TD Garden.

SCOUTING THE CRIMSON
• Harvard rebounded from its 3-1 loss to Northeastern in the Beanpot Semifinal with a 6-2 road win over Dartmouth in ECAC play on Friday
• Freshman Nick Abruzzese leads the team with 30 points on 11 goals and 19 assists, while sophomore Jack Drury has scored a team-high 15 goals
• Abruzzese and Drury were named the National Rookie and Player of the Month for January by the Hockey Commissioners Association
• After splitting time in the first half with senior Cameron Gornet, rookie Mitchell Gibson has claimed the No.