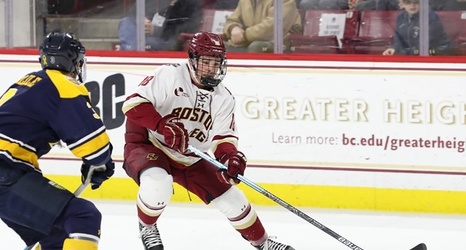 WAKEFIELD, Mass. – Alex Newhook became the first player to win both the Hockey East Player and Rookie of the Month awards in more than four years on Tuesday. The freshman swept the awards for the first time since Jack Eichel in November of 2015.

Newhook led the nation in February with 20 points, 11 assists, two shorthanded goals and a plus-14 rating. He registered six multi-point outings in nine games, including a five-point night on Feb. 15 in a 6-2 win over Merrimack at Conte Forum.

The Newfoundland native recorded at least one point in all nine outings and ended the month riding a 10-game point streak with 10 goals and 11 assists over that span.