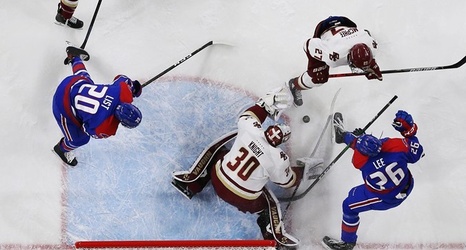 CHESTNUT HILL, Mass. – Spencer Knight was announced as one of five finalists for the seventh annual Mike Richter Award on Monday. Knight was named along with Matthew Galajda of Cornell, Strauss Mann of Michigan, Dryden McKay of Minnesota State, and Jeremy Swayman of Maine.

The rookie from Darien, Connecticut will look to become Boston College's second Mike Richter Award winner with Thatcher Demko (2016). The winner will be announced on April 10.

Knight was named a Hockey East Second Team All-Star and was a unanimous selection to the All-Rookie Team. In addition to winning six Hockey East weekly awards, he earned the league's Rookie of the Month award for November and was tabbed Goaltender of the Month for December.