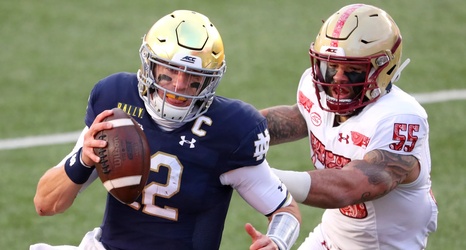 Boston College’s star LB from this past season has found himself on an NFL roster. Isaiah McDuffie was drafted today 220th overall by the Green Bay Packers in the 6th round in the NFL Draft.

McDuffie broke out in his senior season at Boston College, racking up the 5th most tackles in FBS and earning all-ACC second team honors. McDuffie’s quick feet and ability to chase down a QB will be a valuable asset in the NFL, though maybe you shouldn’t expect to see him with a lot of playing time straight away. McDuffie’s skillset is best suited for special teams right now, and he’ll have to overcome his size disadvantage if he wants to make it as a starting LB in the pros.