Hutsko Recognized as Hockey East Player of the Week 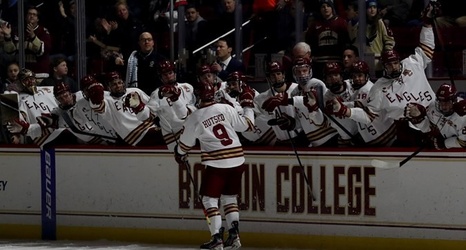 WAKEFIELD, Mass. – Logan Hutsko was named the Hockey East Player of the Week on Monday following a three-goal weekend for the Eagles.

Hutsko netted the game-winning goal in the third period at Tsongas Center on Friday night in a 3-2 road victory over No. 13 UMass Lowell. He then scored a pair of goals in a thrilling 4-3 victory over BU in the Battle of Comm Ave on Saturday at sold out Conte Forum.

The Tampa native is currently third in the nation in goals per game with 13 tallies in 16 games.