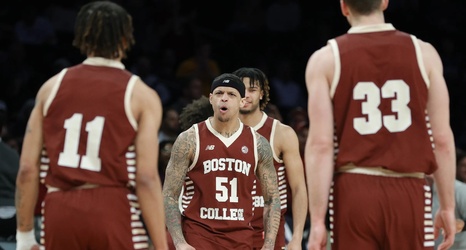 In one of the most heartbreaking finishes in recent memory, the Boston College men’s basketball team gave up a buzzer beater by Miami’s Jordan Miller to lose 71-69 in overtime in the quarterfinals of the ACC men’s basketball tournament.

It was a cruel finish for the Eagles, who played brilliantly for the third straight day in Brooklyn, but their inability to cash in on multiple opportunities to win the game in the final minute came back to haunt them in the most painful manner possible.

BC had the ball with 33 seconds left in regulation and drew the clock down before Makai Ashton-Langford drove to the net, putting up a jumper that missed with 5 seconds left - giving Miami’s Charlie Moore (indoors) just enough time to bomb the ball down the court to the wide open, uncontested Miller to win the game, and send Miami to the ACC semifinals against Duke tomorrow night.