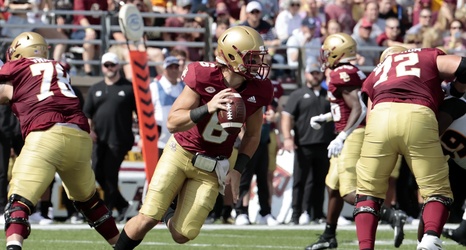 The game got out to a quick start as Mizzou was able to wear down the Eagles’ defense with ease, completing several short passes for gains across the middle. BC had them stopped around midfield, but ran into the punter on the ensuing punt, which resulted in a converted 4th-and-1 by the Tigers. They proceeded to march down the field in 2 more plays and cap it off with a 9-yard TD pass to Barrett Banister to make it 7-0 Tigers.

BC got the ball back, but it was short-lived. The first play from scrimmage was a deep pass from Dennis Grosel while he was getting hit, which resulted in a fairly easy interception by the Mizzou defense.