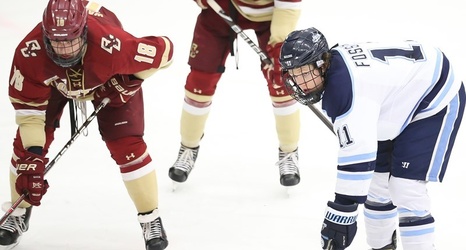 ORONO, Maine – Mitchell Fossier's left wing backhander through a screen with less than a minute remaining in overtime lifted Maine to its second straight 2-1 victory over Boston College on Saturday night as the Black Bears swept a weekend series at Alfond Arena.

The Black Bears improved to 10-8-4 in Hockey East and moved three points clear of BC in fifth place. The Eagles dropped their sixth straight game and fell to .500 at 9-9-3 in the league, remaining seventh with three games left in the regular season.

As the clock ticked under a minute in overtime, Maine pinned Boston College in its defensive zone and a loose puck came to Fossier inside the left faceoff dot.