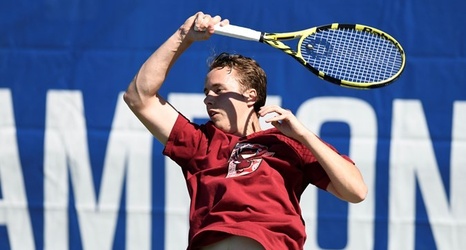 CHESTNUT HILL, Mass. – Boston College will travel to Yale on Saturday (Jan. 25) for a 3 p.m. match against the Bulldogs at the Cullman-Heyman Tennis Center in New Haven, Connecticut.

CHARLOTTE RECAP
• BC posted a 4-3 road win against UNC Charlotte last Friday night in its season opener
• Rookie Max Motlagh won the clinching match for the Eagles with a score of 7-6, 2-6, 6-4 against Constandinos Christoforou
• Derek Austin / Javi Amantegui and Motlagh / Chris Grasel helped to capture the doubles point
• Max Mendelsohn, Motlagh, and Sean Mullins won their singles matchups to round out the scoring for BC

UP NEXT
• The Eagles will take on Virginia on Friday, Jan.