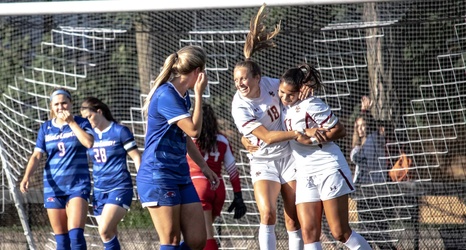 The Boston College Eagles earn their second win this season tonight in front of a full home crowd, leading the UMass Lowell River Hawks 4-1 during their very first meeting with this local team. Five minutes into the game, Riley Lochhead sends a beautiful cross into the box for senior Olivia Vaughn to knock right back over the goaltender’s head and into the corner for her first of the night. Not even three minutes later, Vaughn passes from the right wing up to Sam Smith, setting her up for an impressive under-pressure goal that would later be the game winner.