Eagles and Black Bears Light Up Scoreboard in BC Win 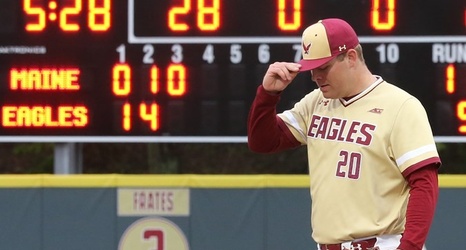 BRIGHTON, Mass. – The Boston College baseball team scored put up its highest run total of the season in an 19-16 win over Maine at the Harrington Athletics Village on Tuesday evening. The Eagles improved to 27-25 overall in the highest scoring game in the two-year history of its home ball field.

Despite an early 5-1 lead through two, BC found itself trailing 11-5 after allowing 10 runs in the top of the third. The Eagles trailed the Black Bears (14-30) by as many as seven runs, 15-8 in the middle of the third. Boston College steadily cut into the deficit, producing a run in all eight turns at bat, tying the game in the sixth and going in fron for good in the seventh.