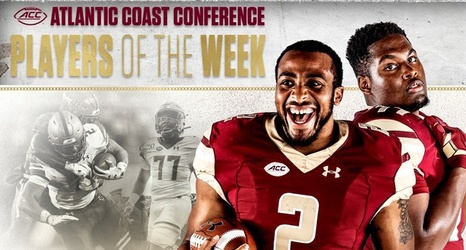 GREENSBORO, N.C. – Boston College's AJ Dillon and Zion Johnson were voted ACC Running Back of the Week and ACC Offensive Lineman of the Week following the Eagles' 26-19, bowl-clinching win at Pittsburgh. The award marks the fifth of the season for Dillon and third for Johnson.

Dillon rushed for 178 yards on 32 carries, including a season-high 61-yard touchdown run against the Panthers. He went over 100 for the 20th time in his career and over 150 for the seventh time this season. Dillon put an exclamation point on the BC win by carrying the ball eight times and picking up four first downs on the final drive of the game to erase the final 5:26 on the clock in a one-score game as he added 47 yards.