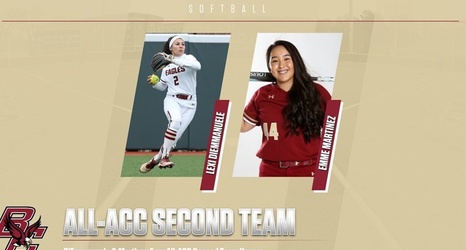 CHESTNUT HILL, Mass. – Two members of the Boston College softball team have been honored by the Atlantic Coast Conference for their performance in the 2019 season.

Senior Lexi DiEmmanuele and sophomore Emme Martinez were named to the ACC second team as announced today by the conference.

DiEmmanuele is a first time honoree. The center fielder led the team with a career-high .352 batting average along with a team-high 63 hits.

She also had 14 RBI, five doubles and a new program record six triples. She finished the season with 17 multiple-hit games along with a six game hitting streak.