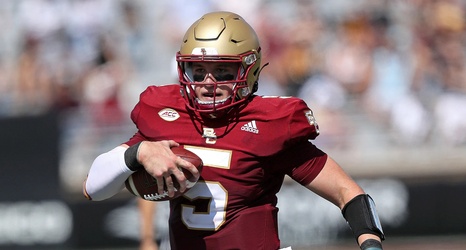 In yesterday’s game against UMass, both Phil Jurkovec and Zay Flowers left the game with injuries. Flowers ultimately returned to the game, but Jurkovec did not.

In this afternoon’s media Zoom, Coach Hafley announced that he does not have an answer of Jurkovec’s status yet, but is expecting to hear back from Jurkovec’s doctors around 1:30 PM today. Hafley did state that Jurkovec’s wrist had been scanned and x-rayed.

The New England Football Journal’s Kevin Stone clipped this moment of the Zoom call on Twitter:

Whether or not Boston College will make an announcement as soon as that information is received is unknown, but fans now know that they can expect an update on Jurkovec’s status at 1:30 PM at the earliest.