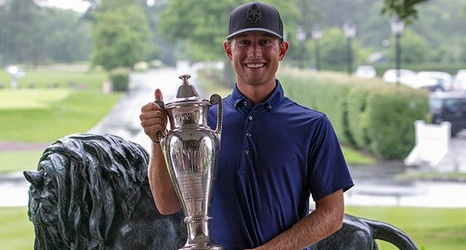 MAMARONECK, N.Y. (July 11, 2019) -- Steady play throughout the 36-hole championship match earned Christian Cavaliere of Mahopac an 8-and-6 victory and successful three-peat in the 100th Westchester Amateur Championship, Thursday at Winged Foot Golf Club. Two more titles were also handed out as Tom Yellin of Stanwich defended his title in the Senior Division and Bill Dober of Brooklawn claimed the crown in the Super Senior division.

Cavaliere's early consistency gathered him a 2-up lead after a pair of pars to open play, while Eric Terminello of Knollwood then settled in with a nice up-and-down for par on the par-three 3rd hole.