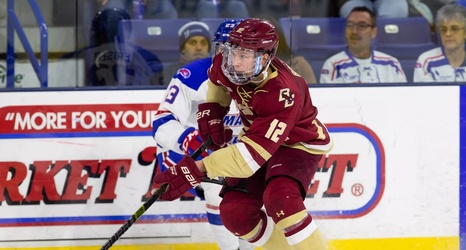 After surviving a scare on the road last night, the Boston College Men’s Hockey team returned home and dominated against Merrimack on the way to a 6-2 win. Four different players scored for BC as the Eagles swept the weekend series for a big four points in Hockey East play.

BC jumped out to a 2-0 lead after the first period, with two goals from their second line in the first 11 minutes of the game. Matt Boldy scored on a great pass from Alex Newhook to finish off a 2-on-1 about five minutes in and Newhook banged home a rebound from a Mike Hardman shot a few minutes later.