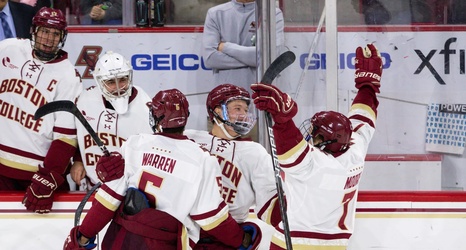 For a brief time in the second period, it felt like the Boston College Eagles were reeling from a post-Thanksgiving hangover, after falling behind 2-0 despite playing solid hockey for most of the first and second periods.

And then, the floodgates opened.

The Eagles scored four unanswered goals, including three in the span of 1:52 in the waning moments of the second period to take down No. 6 Harvard 4-2 in front of a sold-out crowd at Bright-Landry Hockey Center in Allston.

The Crimson got on the board first midway through the first period. Jack Badini poked a rebound off Spencer Knight home to give the Crimson a 1-0 lead.