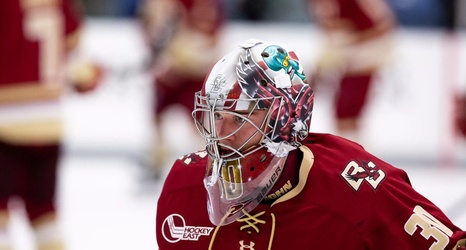 Despite a rocky start, the Boston College men’s hockey team defeated UVM 3-0 tonight, sweeping the Catamounts and winning their fifth game in a row.

The Eagles started out the game struggling, turning over the puck a lot and getting outshot 17-7 in the first period. But the Eagle improved as the game went on, and picked up their first goal at 15:41 in the second period. Aapeli Räsänen took advantage of a loose puck to put the Eagles up 1-0.

Patrick Giles, who rejoined the lineup last night after missing the beginning of the season with an injury, scored a shorthanded goal just over a minute later to put BC up 2-0.