BC Interruption Player of the Week: Taylor Soule (Women’s Basketball) 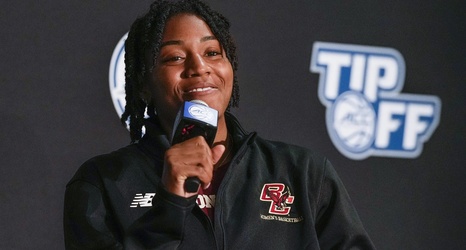 After helping to lead BC women’s basketball to a pair of wins, Taylor Soule is BC Interruption’s Player of the Week!

As usual, Soule scored tons of baskets this past week and made it look easy.

On Wednesday she scored a game-leading 21 points against Northeastern, shooting 73% on field goals. She also added 5 rebounds to BC’s 42 rebound total.

Yesterday, she put up 17 points against Albany and led the Eagles with 6 rebounds. She also earned 3 assists against the Great Danes.

Soule already has 114 points this season, and is averaging 19 points per game.