BC Downs Colorado to Advance in NCAA Tournament 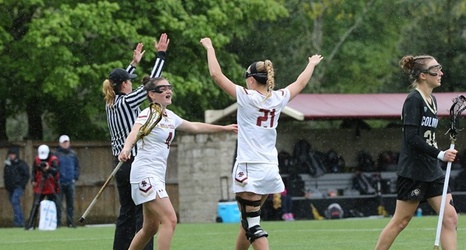 NEWTON, Mass. – The top-ranked Boston College lacrosse team used a first half scoring surge to break open its second round NCAA tournament game before cruising to a 21-9 victory over the #21 Colorado Buffaloes.

After a back-and-forth opening 10 minutes that saw both teams lead by a goal and tied 3-3, BC ran off 11 consecutive goals to break the game open. Sam Apuzzo's sixth goal of the half made it a 13-3 lead with 5:49 to play and then Kenzie Kent capped off the stretch 30 seconds later. The Eagles had a 14-4 lead over the Buffaloes at the break.