BC at Virginia Tech Monday Recap 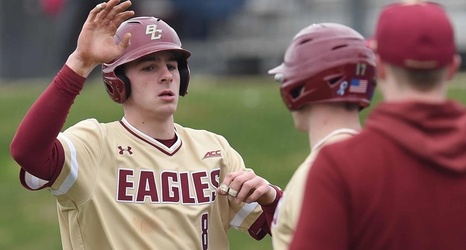 BLACKSBURG, Va. – The Boston College baseball team won its second road ACC series of the season behind a 5-2 win over Virginia Tech at English Field on Monday night. The Eagles improved to 26-25 on the season and 10-17 in the ACC; two games up on the Hokies (25-24, 8-19) for the final spot in the ACC Championship with three games left in conference play.

Junior right fielder Joe Suozzi (Glen Cove, N.Y.) led BC with a 3-for-4 night with two RBI. He drove in the first run of the game with a two-out single up the middle to score senior catcher Gian Martellini (Johnston, R.