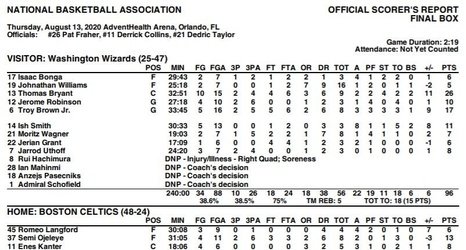 The media could not be loaded, either because the server or network failed or because the format is not supported.

Javonte Green who has been a feel good story since he came on the scene last July, scored 23 points, but it was not enough for the Celtics B squad (C squad?) against the Wizards as Washington picked up the 96-90 win. The game win/loss wise had no bearing on the Celtics as they have the 3rd seed locked up already. If anything the loss could move the Celtics up one spot at the end of the 1st round.