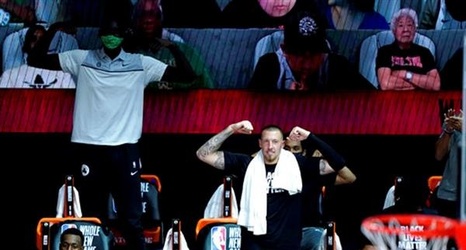 Let’s hope that, in about three weeks, we’re not wishing Brad and the Boys had kept Friday night’s “show”-ing against the reigning-and-defendings in their back pocket.

Through three quarters of play, the Celts cruised to a 34-point advantage by converting over half (38 of 75) their possessions and limiting the Raps to barely one-out-of-three (27-for-74, .365).

In its last 96 minutes of competition, the Boston defense has induced a miss on essentially three of every four opponent trey attempts – 52 failures on 70 tries.

League-wide for the first eight days and 43 “seeding” games (NOT including Friday’s games), the three-ball has been dropping at a .