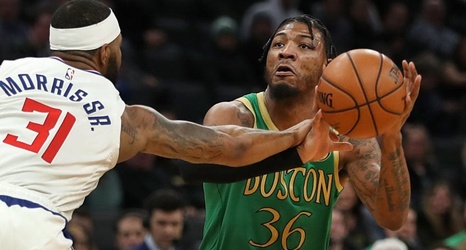 As the lights inside TD Garden went black, Marcus Smart looked up at the neon-green illuminated Jumbotron in astonishment. On the screen, a video reel played clips and highlights from Kevin Garnet’s time on the Celtics.

He watched as the video displayed the passion Garnett competed with: clips of him iconically hitting his chest, or on the free-throw line doing knuckle pushups after Heat power forward Udonis Haslem fouls him. There’s him screaming, yelling, and stomping on the court, and in the air landing a posterizing dunk.

Then, the screen switches to a big reveal, one that even Smart was not aware of: the Celtics would retire Garnett’s jersey.