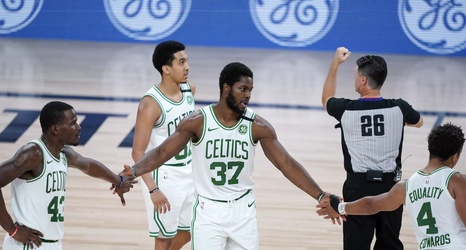 11 Celtics played against the Wizards, as Brad Stevens sat out the five starters and Marcus Smart. We’re going to give some shine to each of those 11 Boston players in this version of the Takeaways, since it may be the last time we see some of them play this season.

1. Enes Kanter started and pretty much got whatever he wanted against Washington’s porous interior defense. However, the play that stood out from him wasn’t a score, but was this read out of the post. Kanter draws the defense and finds Javonte Green in the opposite corner for the three-pointer: