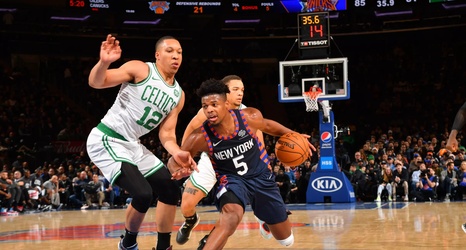 For most of the game, the Celtics looked lackluster defensively and even coach Brad Stevens said his team got “bullied” on that side of the floor at points Sunday against the New York Knicks.

But in the fourth quarter, like it or not, the C’s flipped the necessary switch on their defense even with their best defensive player in Marcus Smart, who suffered an injury to his abdomen early in the third quarter, sidelined.

Facing a six-point deficit with eight minutes remaining, the C’s defensive intensity ramped up to spark a game-closing 26-11 run to propel Boston to a 113-104 victory at Madison Square Garden.