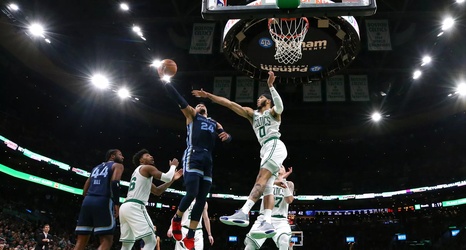 1. At the 6:53 mark of the second quarter, Dillon Brooks hit a step-back three-pointer to put the Grizzlies up 42-35. That shot capped a 9-0 Memphis run and it looked like Boston was once again in trouble at home against a lesser opponent. But unlike most of the previous three weeks, the Celtics didn’t let it snowball. Instead they put together the most impressive defensive stretch they’ve had all season.

Boston started scrambling on the perimeter to force turnovers. On the rare times Memphis got something off the bounce, Boston collapsed and shut down the paint.